In case you have missed it, I picked three polishes in the beginning of 2018 and marked their current fill line. Now, after four months, it is time for my first update to recap the progress on my project of #unserprojectpolish2018! Actually, I was supposed to post my first update after three months but I was busy handing in my PhD thesis. I read everyone’s progress at the beginning of April and it was so much fun! Now it is time for me to post my own update.

The first thing I did was to re-swatch all three polishes. I will show you the two polishes which I will continue to use. The third polish (China Glaze Oxygen) was very streaky and disappointing on the nails, which is why I will not continue to use it. It was replaced by another polish (see below).

The first polish was P2 Night Out, a beautiful muted dark blue creme polish that I really like wearing. It is perfect to wear on its own, but it is also perfect as a dark base for all kinds of toppers and shifty top coats. This is how I will continue to wear it – that way it will never get boring!

The second polish was also from P2 and is called Charming Secret. It is a cool-toned very light pink shade that is perfect for every day. When I don’t know what to wear on my nails, I will most certainly reach for this one.

Here is the progress I made with the two polishes, (the second black line shows the current fill level). As mentioned above, China Glaze was replaced by another polish, namely Essence Sweet as Candy, which is also a neutral “my nails but better” sheer polish. Swatches of this one will be provided in the next update :). 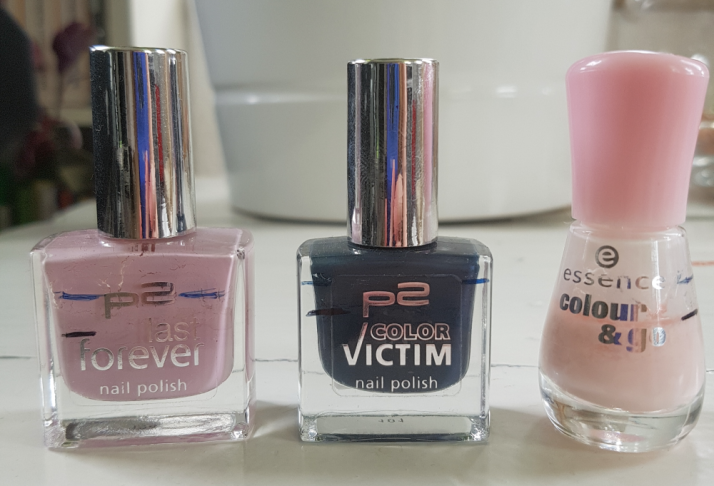 I will just continue to use these instead of picking new polishes to use until the next update. I think I will be able to finish these in 2018, maybe even before the end of the year, and then choose new “go to” polishes once these are empty. I really love this concept as it makes choosing a polish when in doubt so much easier! The next update will be posted around the beginning of July!

Stay tuned and have a nice day 🙂

Happy New Year! The first week of 2018 is over and I spent a lot of it in bed with a nasty cold 😦 Boo! I hope you guys had a better start into the new year!

Today I would like to introduce you to a challenge that I’ve been wanting to join for a while, and this year I finally got around to it! It is the “Project Polish 2018” challenge, initiated by the lovely Eri from lackislove and Nici from blueshadowdragonheart. Everyone who would like to participate can pick a few polishes that they would like to empty. There will be updates every 3 months to see the progress. The hashtag to use is #unserprojectpolish2018 .

I think this is a great way to actually appreciate the nail polish you have and to bethink yourself of your stash and how far you can actually get with one bottle of nail polish. Also, I think for me personally, it will help me decide what to wear. Like a few “go-to”-polishes that I will put on my nails when I have no time to think about what I want to wear.

Here are my picks for the challenge: 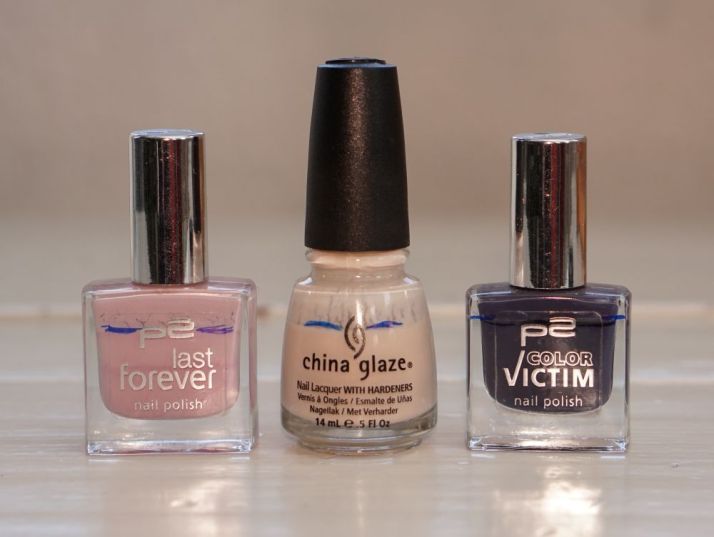 As you can see, I picked two very neutral, every day, nude polishes that I can wear to anything. I love the P2 Charming Secret on my toe nails, too, so I’m confident that I can use that one a lot. The China Glaze Oxygen has a “my nails but better” effect, so it is really wearable, too. Also, since it is so sheer and jelly-like, I wanted to try some glitter sandwich manicures with that one. I picked the P2 Night Out because I think it makes a great base for all kinds of toppers! Which leads me to my second nail-related resolution for 2018 – use toppers more often! So this polish will hopefully help me wear all the beautiful toppers from my stash.

Fun fact: I finally ordered one of these (a polish bottle holder to tilt the bottles) – probably a necessary tool in order to really finish a nail polish!

Can’t wait to check out all of your projects! And especially to see the updates in March! What other resolutions for 2018 do you have (nail-related or not)? Or aren’t you a fan of that?

Welcome to my blog!

You can find here all the little things that make my life beautiful and that i therefore would like to share with you.
Enjoy!